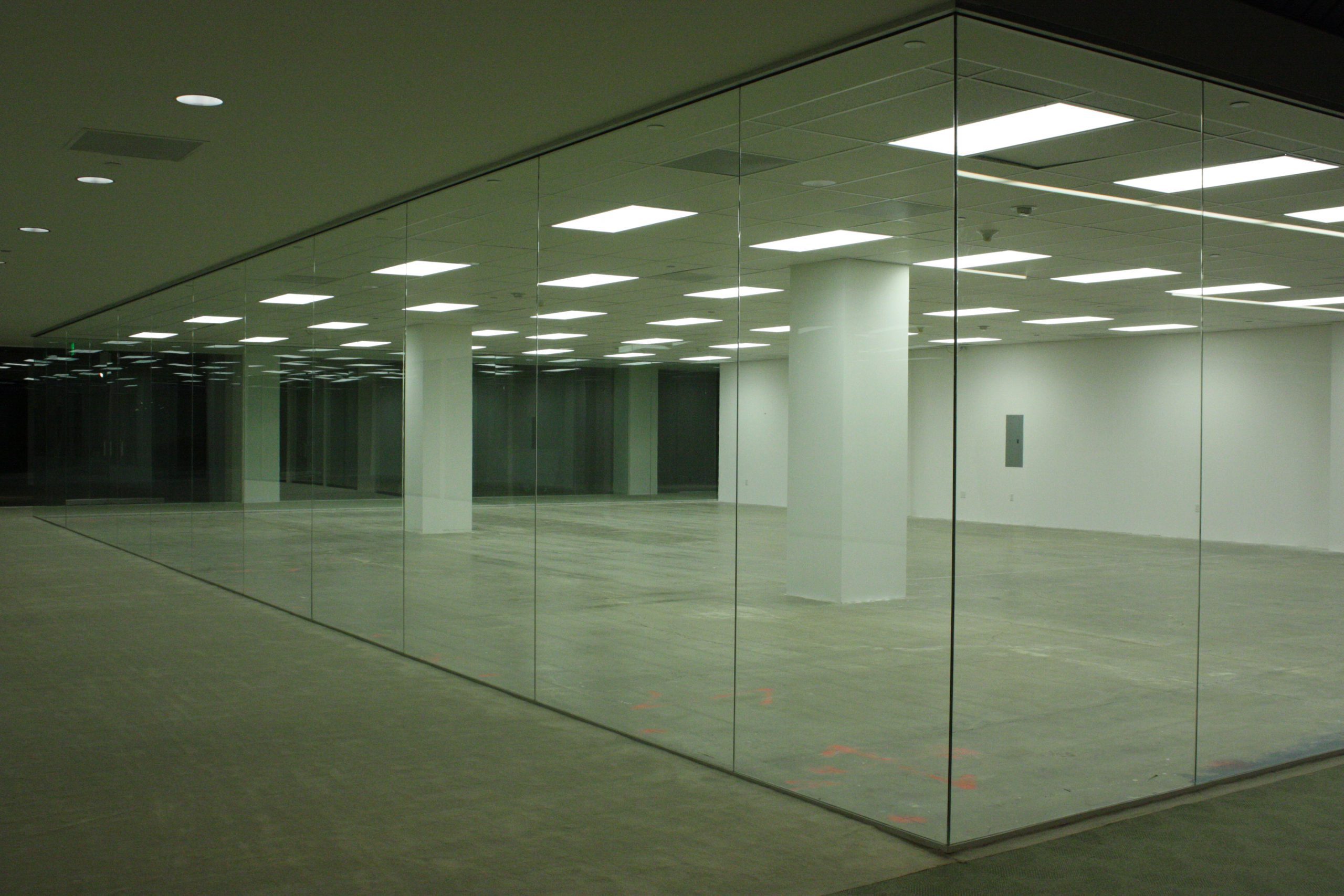 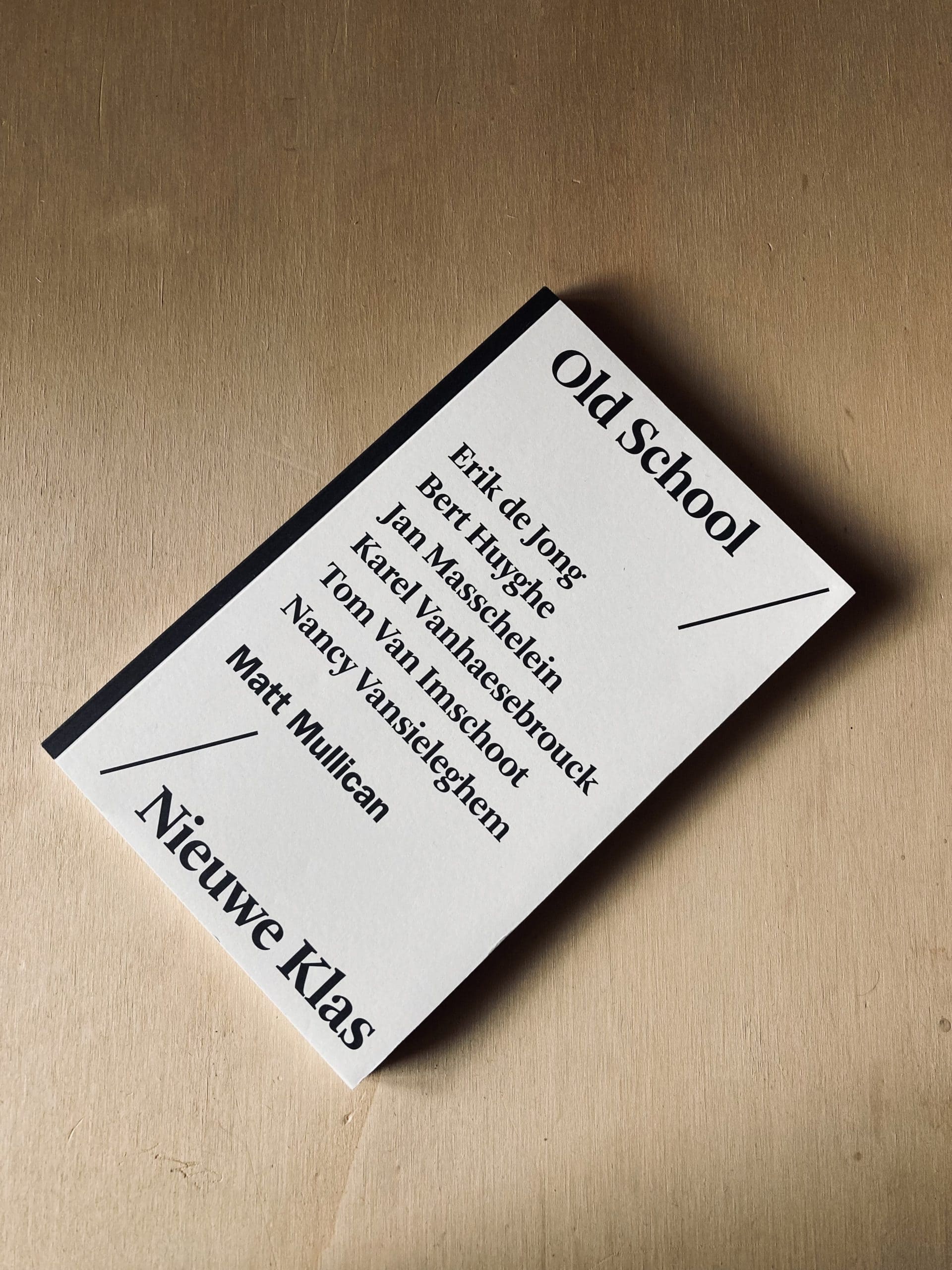 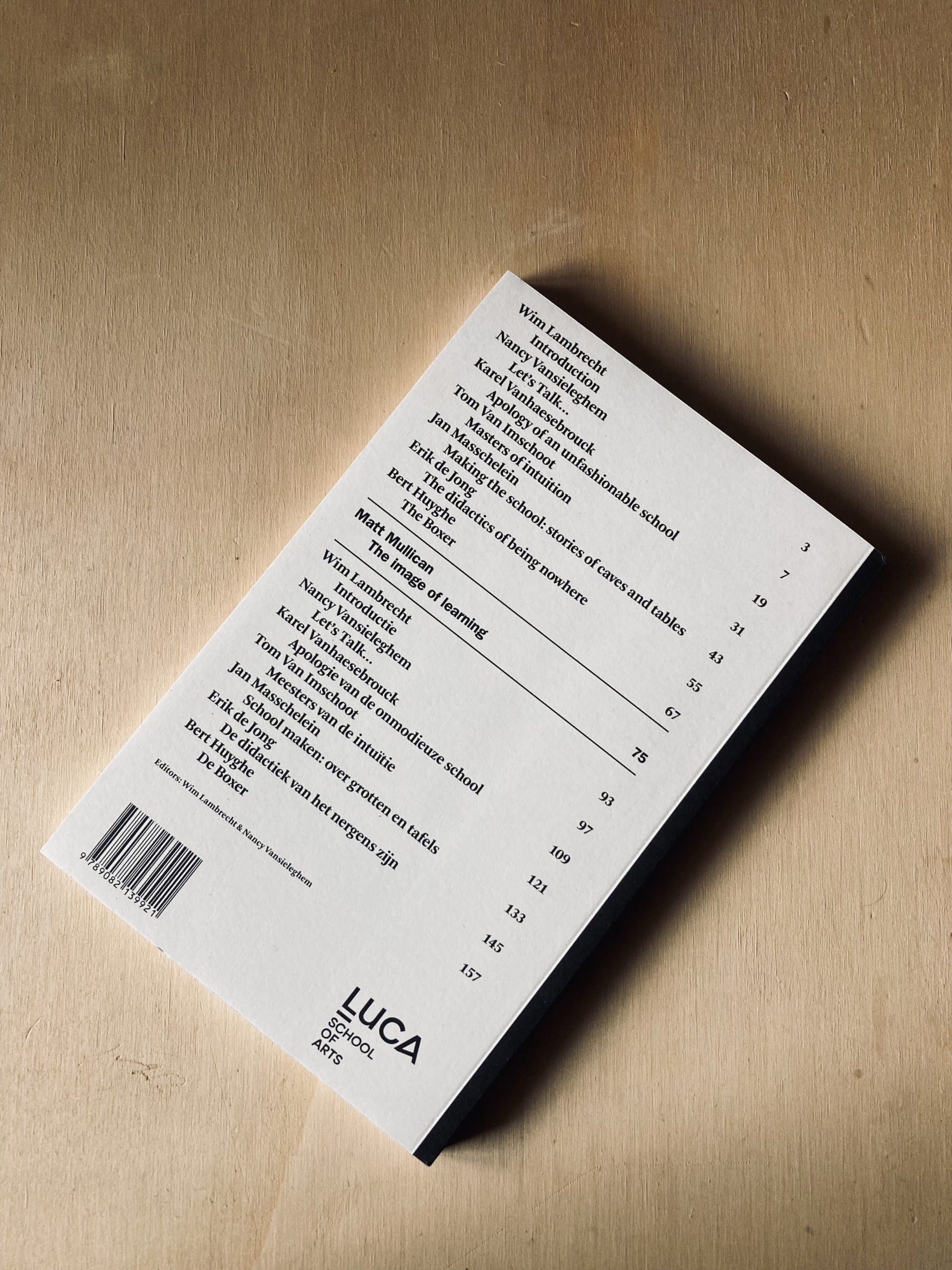 Art can’t be learned! It was once assumed that real artists were simply born as geniuses and true originals, and that art should speak for itself.
Seen from this perspective, the art academy was – rightly or wrongly – seen as a rather serious threat to art, as was art education to natural artistic talent. The art academy was viewed above all as being complicit in the institutionalisation of mediocre art and mediocre artists.
It was thought best to stay well away from such places if you ever wanted to accomplish anything! The general view of art and artists has all but been reversed since then. But can the same be said of art education?

Quite some time has passed since the publication of Herbert Read’s seminal book ‘Education Through Art’. In the Dutch translation, the title of the book was translated as ‘The Educational Function of Art’, which caused the book to be viewed with quite some suspicion in the art world. Art as something functional?!
The convergence of the discourse on the quality of education on the one hand, and the social debate surrounding art and artists on the other, creates an opportunity to pause and to contemplate the intrinsic, educational quality of art and whether we might once again come to appreciate it. As such, it might provide some insight to overlay the artistic practice with the educational practice and to view them as one. 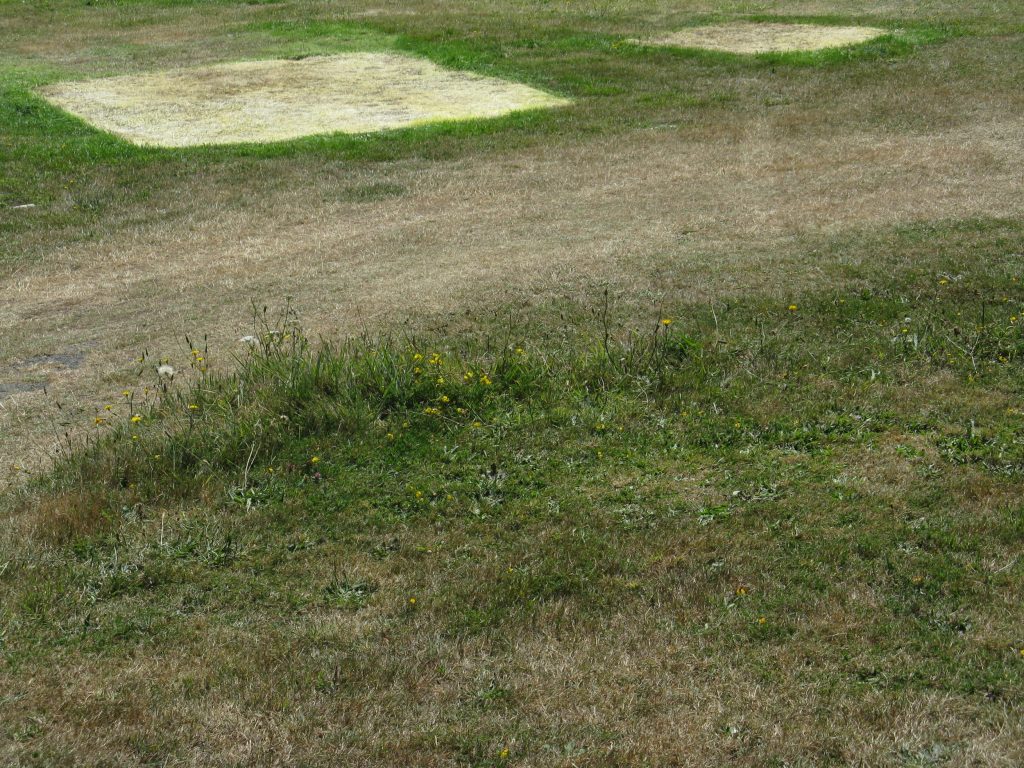 (…) In principle, being lost or incorrect or not knowing the answer is impossible provided that the students work together and exchange ideas. The challenge for the student is then primarily in his or her confrontation with areas of knowledge that reside beyond the art itself. And this challenge ultimately leads to new insights with respect to how the student relates to the question: ‘In what way are we either somewhere or nowhere?’
This way of working can lead to an increase in awareness for participants (from creator to public) but it cannot be followed or learned as part of a specific curriculum. However, space can be made within the normal curriculum of lessons, tutorials and lectures for a ‘hidden curriculum’.

One of the most important preconditions for the hidden curriculum is that a ‘learning community’ is created. This means that an environment must be created in which all parties – students and teachers alike – have a desire to learn outside of the normal curriculum. All options, whether they could lead to a visual manifestation or not, are kept open, tried out, shared and discussed within this learning community.
In this way, the learning process becomes a shared interest and the traditional student-teacher relationship comes to be characterised by an aspect of bartering. Viewed from this perspective, a search is conducted – embarking from a mental place of shared acceptance of ‘nothing’ and ‘nowhere’ – for what could be called a ‘new beginning’.

(…) ‘The didactics of being nowhere’ is therefore a proposal to break through to new forms of independence by means of a critical repositioning.

This position of ‘being nowhere’ in art education was further put in practice with the founding of the Open Source Urban Campus (O.S.U.C.) in 2011.
The O.S.U.C. was based on the model of the Mountain School of Arts and represents the non-accredited portion of the Fine Art course in Maastricht. In this sense, the O.S.U.C. is an ever-changing spatial situation, but also a mental state without which the Fine Art course would not be what it is. The O.S.U.C. makes it possible to see the ‘hidden curriculum’ as being perhaps the most essential part of the course.
The core idea behind the O.S.U.C. is to assess new options for art education and at the same time to tackle the many questions concerning the positioning of artistic practices in a complex and extremely fragile socio-political reality. Furthermore, it is a call to conduct critical research into the possible relationships between different artistic practices and the different contexts of knowledge transfer and curatorial practices. The research of these three areas represents in itself the first exploration of the possibility of connecting the artistic and educational spaces.

(…) To experience change is to learn. This philosophy has been put through its paces by the O.S.U.C., allowing it to subsequently be incorporated as part of the Fine Art curriculum.
This of course carried with it an element of risk, given that the strength of the O.S.U.C. had, to a large extent, been in the spontaneity with which events were able to proceed. Spontaneity is something that will always have to be fought for in the academic context. In addition to spontaneity, another factor had played a crucial role at the O.S.U.C., and that was intentionality. Acting deliberately. A sort of guided coincidence that has a lot to do with the will to initiate something that will ultimately lead to the conscious adoption of a different position with respect to that which came before. The combination of spontaneity and intentionality is important, because it precludes a non-committal attitude. It’s about accepting, as if intentional, something that happens spontaneously. This demands the constant alertness of everyone involved, because anything could be the start of something new. 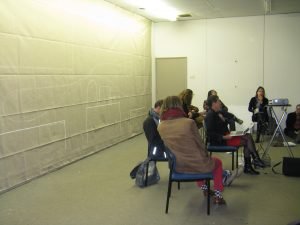 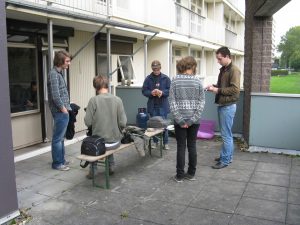 The didactics of being nowhere.

The experience of learning becomes more intense, the less it is linked to a fixed place or to immobilisation, to organised time or to a rigid ‘official’ use of language. The basis for the didactics of being nowhere is that a situation must be created that is challenging enough for one to form a deliberate connection, one independent of a place.

People converge somewhere based on an intrinsic motivation.
That motivation can vary greatly. And this variation is extremely important!
The place of convergence is literally only that. There is no reason to assume that the place of convergence is a precondition for converging in a physical, demonstrable sense or that the place is a precondition for the convergence at all.
Knowledge has a value here, but it is also a claim. Letting go of this claim, letting go of (prior) knowledge as being something of value, does not result in a deficit of value. It heightens one’s sensitivity to the moment at which value is created.
Every spontaneous moment, every word, every suspicion has value.
This sensitivity to the creation of value is what determines the insight received at the moment that ‘nothing’ transitions into ‘something’, the moment that ‘nowhere’ transitions into ‘somewhere’.
This insight ultimately holds the essence of what learning and art are respectively all about. It is here where the artistic and educational spaces meet in the practice of ‘being in transition’.

By making use of these three metaphors, situations can arise in which there is a great learning potential.
Based on a shared interest, something is initiated. Everyone assumes the same risk, namely of starting something that has no predetermined goal. Everything that is said and done is documented and archived in different ways, whether by utilising photography, video, language or any other form of notation.
The way the use of this means of notation develops forms a reflection of the unique, mental route taken by the documenter. This way of working requires an investment in time (a deliberate slowness).

The composition of the group is intrinsically heterogeneous. It is not important to know that they are all art students, or that they are students of a particular year, or that they speak the same language. Nor is it important that there may be large age differences between the group members.
What is important is the question of what brought them together and what expectations they have with respect to the situation in which they find themselves.
(…) In the final stage, the participants present the archives that they have created. This presentation requires great care and precision. The way in which image, language and sound will relate to one another, to space and to time, and the way in which these heterogeneous elements will come to form a new whole, will determine how the process will further develop. The presentation allows the participants to reconstruct and also digest the situation as it has been up until this point.
At that moment, the differences in understanding become clear and it is necessary for each participant to reposition themselves.
Up until this point, one had perhaps an idea of the direction in which the situation might develop. And one had unwittingly settled upon this possible eventuality. We could see this as a sort of semi-tolerant behaviour with respect to the situation. But only now that a clear result has arisen does a moment of detachment dawn, a moment of ‘active alienation’.
Now the situation can only develop further once there is an openness that allows both the abandonment of previously adopted positions and the seeding of a genuine interest in a ‘new beginning’.

The (mental) space that is created is transparent, mobile and flexible and now offers access to the intrinsic motivation to collectively think and create based on a common need.
The art that results is fleeting and comes about at times and places that are unexpected. It appears just as suddenly and spontaneously as it disappears and it almost always does so anonymously. There is also the chance that it won’t appear at all. In which case there is only a suspicion.
And it is in this space that the student becomes aware of which ‘new beginning’ they have embarked upon and with which visual manifestation a precarious world can be made imaginable.

Returning to the introductory question of this text – namely, ‘What do today’s art academies actually achieve?’ – I think that we should conclude that an art academy does not teach students how they should make art as future artists. An artist doesn’t make art. An art academy can provide insight into the necessity to do something or not to do something. An art student learns the value of causing an unsolicited ‘something’ to take place ‘somewhere’, something that will resonate and possibly evolve into a moment of transition in which art and learning become one.

U kunt meer informatie vinden over welke cookies we gebruiken of deze uitschakelen in de instellingen.